The consumption of sweetened drinks, such as soda, juice, Kool-Aid and sports drinks, has been on the rise in past decades. At the same time, the prevalence of obesity in children has also risen. These drinks — even 100 percent fruit juice — contain a lot of calories with little or no nutritional benefit.

The Truth About Juice

Many people think of juice as an essential part of a child's diet. However, juice isn't as healthy as people think.

It's much healthier to eat the fruit rather than drink the juice. For example, a 12-ounce glass of orange juice, which is the juice of two to three oranges, has about 180 calories, while one orange contains only 80 or 90 calories (and for older children, it does more to make them feel full).

For children who are overweight, the basic recommendation is no juice.

The Truth About Soda

Sodas and other sweetened drinks are full of sugar such as high-fructose corn syrup. Many also contain caffeine, which is a diuretic that can cause dehydration.

Another problem with sweetened beverages is that the body doesn't register it's full after drinking hundreds of calories. This may have to do with ghrelin, the hormone in your stomach that lets you know when you're hungry. When the hormone increases, you feel hungry. When you eat, the hormone goes down. However, it only works with food, not liquid. Drinking soda, juice, sports drinks and other sugar-sweetened liquids does nothing for your hunger, even if you consume hundreds of calories. As a result, sugar-sweetened beverages are often wasted calories.

In other words, the human digestive system is not designed for drinking calories. Soda is a relatively recent addition to the human diet. It was introduced in the second half of the 19th century and there was not an obesity problem until the 20th century. When looking at obesity in the United States alongside fructose and soft drink consumption, they are on a parallel line.

How Sweet Drinks Add Up

To fully understand the impact of sugary beverages, consider how the extra calories from these drinks add up and translate into pounds.

What seems like a harmless glass of soda and two glasses of Kool-Aid a day is equal to roughly 40 pounds of weight gain over a year. Children rarely burn all of these extra calories through exercise and activity. Even if a child only has one soda a day, it leads to 15.6 pounds of weight a year.

What Kids Should Drink Instead

It's best for children and their parents to limit or eliminate juice, soda and other sugar-sweetened beverages. Instead, your child should drink:

Encouraging Your Child to Eat Fruits and Vegetables

There are many ways to get fruits and vegetables into your child's diet. Read our tips and tricks, empower your child and get recipes.

Exercise can help your child maintain a healthy weight. Our tips can make it a fun, family activity that helps your child achieve their goals. Read on.

A Family Approach to Weight Loss Is Best

Weight loss requires changes in everyday habits. Children who see their parents and loved ones modeling healthy behaviors may be more successful. Read on.

Overweight children face a higher risk of health problems that include asthma, diabetes and more. Diet and exercise reduce some of these risks. Read on.

Eating healthy can be challenging. We offer helpful tips that include what to eat, foods to avoid, common misconceptions and more. Read on.

Helping Your Child Be a Healthy Weight

The best way to help an overweight child is by focusing on their health and not their weight. Read our tips, which include using rewards and more.

Providing a pleasant mealtime atmosphere enables your child to focus on eating. Read our tips for making meals enjoyable, handling misbehavior and more. 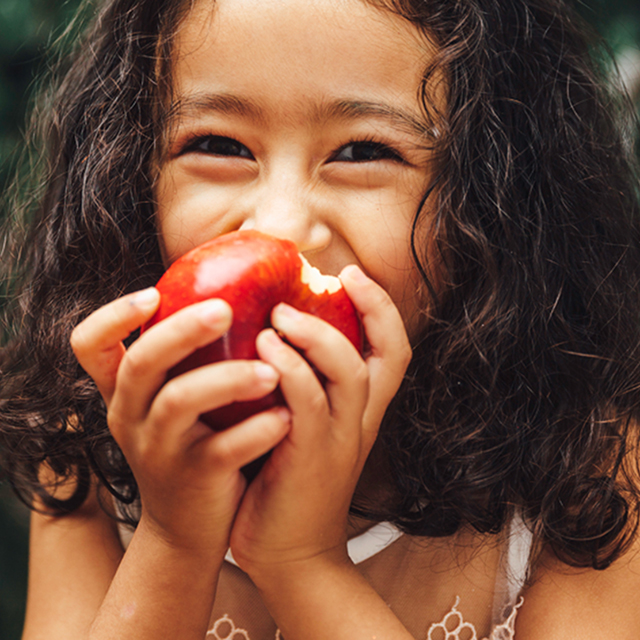