From Tiny Preemie to Nonstop Toddler

Whenever Angela Banks takes her son, Tru, out for a stroll in San Francisco, or to Target to do their shopping, the vivacious one-year-old can't help but make friends. He waves and blows kisses at anyone who smiles his way. Those who haven't followed Tru and Angela's journey on Facebook might never guess at the challenges Tru has overcome in his first year of life.

Born prematurely with a tracheoesophageal fistula and a birth defect that caused his stomach and lung to be connected, Tru spent his first five months of life in the Neonatal Intensive Care Unit (NICU) at UCSF Benioff Children's Hospital San Francisco. After two surgeries — the first performed just six hours after birth — and a long recovery process, Tru is at home with his mom and living life as a typical toddler.

What did you find out about Tru after he was born?

I had been admitted to UCSF at 31 weeks because I had preeclampsia, high blood pressure and high level of protein in my urine. They wanted to keep me pregnant as long as possible.

At my 32-week ultrasound, they noticed that they couldn't see his stomach. They said his stomach could be small, or he might not be able to swallow fluid or he could have a blockage. I was told if that was the case he could have surgery to correct it. They were not expecting that he’d have this birth defect.

My blood pressure stayed high, and at 33 weeks, they decided to deliver the baby. Not long after he was born it was discovered that he had tracheoesophageal fistula, so he was unable to swallow. It's a pouch at the top of the esophagus that stops the food from going to the stomach. He was also born with his stomach connected to his lung.

After he was born, I called the nursery to check on him and they told me there was a problem and he would need surgery. Dr. Tippi MacKenzie came in and talked to me and told me about the blockage in his esophagus. But he was too small to have the surgery right then. He was only 3 pounds, 13 ounces. So he had the first operation six hours after birth to cut off the stomach from the lung. Forty-five days later, he had the surgery to connect the esophagus to the stomach.

Was it shocking to hear right after Tru was born that he would need major surgery later?

It was heart-breaking because I had never heard of anything like this. It was all a blur because I could not believe that my baby was going to have to have major surgery. He's the only one in my family to have a major surgery at a young age. I'm a single mom, and I had my family and friends around me, but as a single mom you’re experiencing it all by yourself. It was very stressful.

Tru was in the NICU for 146 days, partly because at the anastomosis site from the first surgery there was a leak that had to be monitored. He also had a chest tube. The leak put him at a high risk for infection.

How were you able to cope during that time?

Since I live in San Francisco, I was able to go home and get my things, but the nurses, the doctors and the other parents in the NICU, we helped each other and leaned on each other. The family resources in the hospital, the social workers — everybody was always there for you. You were never left in the dark. You always knew what was going on through your journey. There were some sad days where he wasn't doing well or he was sick and he had to be on oxygen. Things would sometimes get worse before they got better. The support from the nurses, doctors and other families was always there.

When did you bring Tru home?

A week before his 5-month birthday. It was overwhelming because you're used to the nurses being there. He was past the newborn phase, he was sleeping through the night, but having to be there 24-7 and monitor him and make sure his feeds were correct — it was overwhelming. He had a gastronomy tube, but they had shown me everything I needed to do for that before we left the hospital. I was comfortable with taking him home, but it was a lot to deal with.

What was it like with him at home the first few months — and how is it now?

It went pretty well. At first he had weekly dilations, so I had to bring him in so they could anesthetize him and feed an instrument down his esophagus, then open up different sized balloons to clear away scar tissue and make sure he can swallow different sized amounts. Those days we'd stay at the hospital overnight. At one point he came down with the flu and had to get admitted. Since his recovery from the flu, he has been a normal healthy baby, reaching his milestones. He started eating solid food at six months. His dilations got reduced to once every three weeks. And he hasn't needed dilation since he was 11 months. He never took a bottle as an infant, but today he's a normal 1-year-old.

What do you think about when you look at him now and reflect on what you've been through together?

I am so proud of him. He's proven he's a survivor. At age one he has a medical history longer than most adults and he's doing great. He loves animals. He loves to sing and be sung to, especially the ABC song. 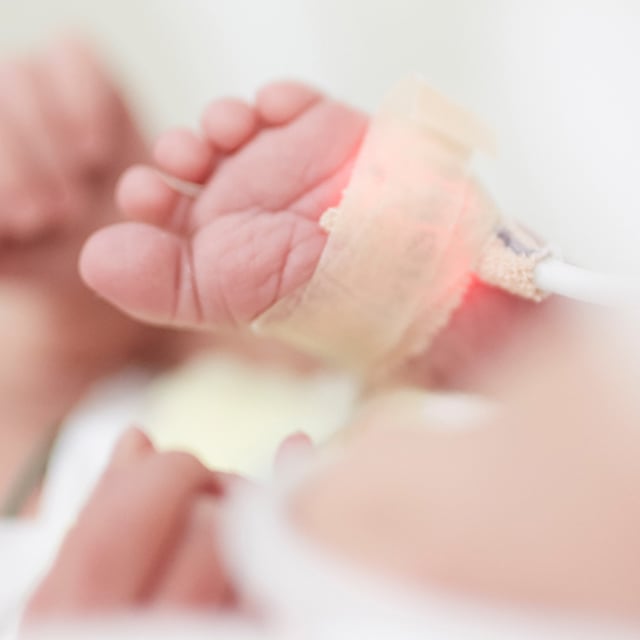